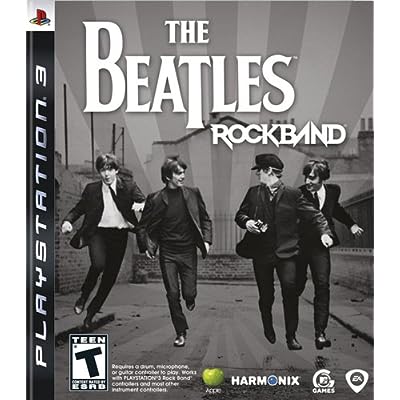 We got the Beatles Rock Band game last night and played it for a couple of hours; here’re my initial reactions: I’m underwhelmed.

Now, don’t get me wrong, it’s a very well-made game. It’s beautiful to look at and they made some improvements over Rock Band 2, including vocal pitch selector and melody or harmony choices! Although, I’m not sure I’m liking the softer, washed-out colors of the scrolling grids and buttons. It muddles the field and makes it harder to see what’s coming, and keep an eye on your bandmate.

The disappointing aspect is the music itself. Now, I’ve been a HUGE Beatles fan since Jr. High. Given the choice of listening to the Beatles, the Rolling Stones, or Elvis–the Beatles without hesitation. But, let’s face it, their music is not exactly complex and challenging. In fact, their first half of their career up to and including most of Rubber Soul, they’re the Ramones of pop music: all you ever need is just 3 chords.

They started experimenting and branching out with Sgt. Pepper, and had a lot of diversity in the White Album (my general favorite), but the music is still relatively simple with a few exceptions. (Like, Abbey Road’s “I Want You/(She’s So Heavy)”. The last third of that song is heart gripping and amazing, although very repetitive.)

Now, I should note I’m coming at this from the point of view of the guitar. Lyrically the songs can be challenging, and I don’t know about the drums. But let’s face it, Ringo was no Neal Pert. I play Rock Band and the Guitar Heroes exclusively on medium, and that’s been getting a little boring–but that 5th fret on hard is a real challenge for me. Still, medium in Rock Band 2 does still provide me with some entertainment. But medium in the Beatles is like the easy setting. If it weren’t for the fact I enjoy the music and find the animation interesting, I’m not sure I’d bother playing (and truth be told, I kinda hate pre-Rubber Soul Beatles). I feel I’m being forced to play on hard if I want challenge… which is not a bad thing since it IS a game. We’ll see how much hard setting adds challenge, whether it eliminates the fun in place with controller-throwing frustration. (I’m looking at YOU Castlevania for SNES!)

We, my wife and I with daughter guest appearing for a bit, played only on Quick Play, we haven’t played Story Mode yet, which I’m really looking forward to in hopes of unlocking some exciting songs. I’m hoping “Norwegian Wood” and “A Day in the Life” are in there. But, I’m leery. I understand you can’t move to the next chapter of the game until you play EVERY song in the current chapter. No options for skipping any you just don’t like. Also, one of the fun things about Rock Band is being able to create characters and outfit them–none of that with the Beatles.

So far the game doesn’t look worth $55+. I’d say maybe $35, $40 tops. But I tell you what: if they ever come out with a Rock Band: Pink Floyd, I’m buying two copies–one to play, and one to take into the warm embrace of my arms and do things with that most religions outside southern California would hate.

The daily…weekly…occasional journal by someone you don't know.